Paintball has been around in one form or another for over 30 years now. The game originated in the USA early in the 1980’s and there are several theories as to how it came about. Today; paintball is played both recreationally for entertainment & professionally as a sport. In both cases, there are several formats in which it can be played but many hold the belief that outdoor recreational paintball remains the format that is the most fun.

The most widely held belief on the origin of paintball is that it was as a result of forestry workers developing a device with which they were able to mark trees for felling, from a distance. It’s thought that the very first paintball marker was built early in the 1960’s. It’s alleged that ranchers then took hold of the idea and used it for marking their livestock, before taking things a step further and turning the markers on each other but this theory remains unverified – What did happen was that it resulted in a new extreme sport, which has since become very popular worldwide.

Paintball has long been an established recreational activity across the world, it’s immensely popular across all genders, ages and for all occasions – including; birthday parties, family days out, team building, corporate events or just to have fun with some friends.

As with all sports, paintball is a game of competition which is played to win, and millions of people worldwide participate on a regular basis. Whilst there are some who play internationally at professional tournament level, the sport still largely remains a recreational activity for people who enjoy the occasional fun day out with a few friends a couple of times a year.

The game of paintball itself has several formats and can either be played outdoors or indoors, with any number of players from two to 200. There are some facilities that host what they call “big games” in which many people participate at once. A game of paintball typically involves two opposing teams vying for an objective – which could be to complete a set task i.e. retrieve a flag, invade or protect a fort, collect items or simply to eliminate all members of the opposing team. Sometimes the games are played with a time limit in place; sometimes they run for an extended period of time until the set objective is completed by one team. Games can therefore take anywhere from a few minutes to hours on end. 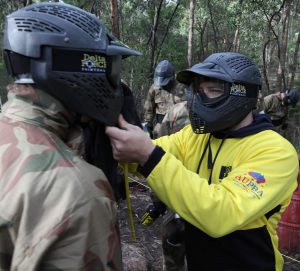 The rules of the games vary depending on the setting, whether played recreationally or in a commercial or tournament setting. Regardless of the specific rules, any game of paintball is designed to ensure the participants have a positive and enjoyable experience in a safe environment. Safe participation in the sport requires very specific equipment.

Paintball is not a game that relies purely on physical prowess and can therefore be enjoyed by just about everyone (minimum age restrictions generally apply). If you are not physically fit or just don’t fancy being too gung-ho, then you can hang back, sneak around and use sniper shots to pick off each of your opponents one by one – the beauty of the game is that there is a way to play that suits everyone!

For some examples of different kinds of paintball fields, you can link through to some of our member’s websites to see just how exciting and action packed different types of fields can be.